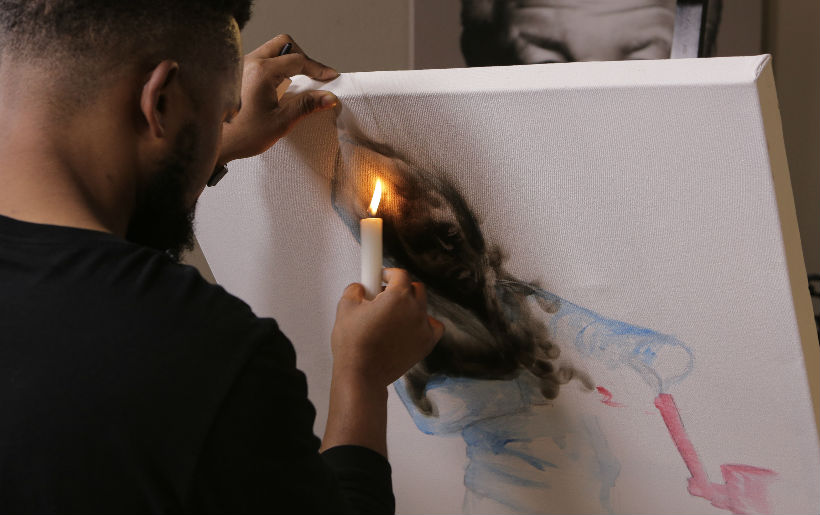 Azael is a practising artist and an entrepreneur based at August House studios, Johannesburg South Africa. Langa has participated in art fairs locally and internationally and featured in several galleries around South Africa, he also does outreach programs and charity work including a charity auction in New York in 2015.

Azael works reflects the socio-political reality through various mediums including smoke drawing, an art form he has mastered to be his signature medium. He draws from the literal and symbolic imagery about topical issues in the rich South African discourse. Azael’s work is a socially sensitive yet politically transformative communiqué reflecting dreams, challenging beliefs thereby confronting our state of natural being.

His pieces are a meaningful interrogation of subjects that define our existential reality, with in-depth unstated narrative in the instantly recognizable simply expressed to evoke sentimentality. His work is sought after by passionate collectors and art enthusiasts around the world.

Artist Azael Langa deals with the pertinent issues of corruption & exploitation within his works. He approaches these themes through depicting everyday experiences of overlooked individuals who stimulate our economy. A subject matter that speaks to the core of South Africa, as many individuals are slowly been forced out of their hometowns due to escalated real estate prices forced through the overdevelopment of residential areas.

He works predominantly in smoke, oil paint, ink & mixed media on paper or canvas. Langa’s artworks have been featured in numerous auctions & group shows both locally & internationally, namely Johannesburg, Pretoria, Cape Town, San Diego & Miami. Some of his more recent shows from 2017 include the SA Art Collective at the ‘New York Art Expo’ in New York & the ‘Dual’ exhibition at Trent Art Gallery in Pretoria.

Whilst Langa has built up a steady following, the exhibition at the Julie Miller Investment Art Institute entitled OVERLOOKED SHADOWS OF THE ECONOMYwas his first solo exhibition, which was completely sold out.

I wish to honour the unseen men and women, the overlooked shadows behind the economy, trying desperately to earn a living. The early morning street vendors, the ordinary breadwinners working 9 to 5, the hookers and drug mules who work the streets at night- all these silent ghosts in our economy, desperately trying to support their households.

To capture and immortalize these ignored people, I use two types of smoke in my drawings, candle & plastic smoke. I use the poisonous smoke from plastic in an attempt to translate the toxic side I have witnessed in this shadow economy and I use the candle smoke as a gesture of illuminating and purifying their situation.

Most of us in the community are where we are today because of overlooked people like this. With this exhibition I hope, to shine a light on these very important people in our economy and to tell their stories as a way of appreciating and immortalizing their silent sacrifices.

Spirituality and His work

“What makes art a spiritual experience for me is the process that I take when creating my art. Looking at the medium I us to create (candles), this medium allows me to be in tune with myself in the process of creating.

At first when I started using a candle it was just an experimental medium, I later realised that it actually allows me to be aligned with my spiritual side, it is more of an extension of my soul. It helps me to acknowledge the presence of other energies around me that gave birth to my first solo exhibition the ‘Overlooked shadows of the economy’ that was shown at Julie Miller investment art institute.

This solo was a response to the energies I felt when seeing or/ and when coming across people around the city and even when I go home. It felt so strange at first it was as if I know them or their pain , happiness  or suffering. As an artist I had to explore it in my medium and I started capturing this souls or spirits in my work.

This was also a healing for me, as I lost my younger brother this year the experience pushed me to explore more into the spiritual world. I yearned to talk to him or feel his presence around me that influenced my work as I directed this energies to be positive when reflected in my work. This is an attempt of finding healing and closure and help others do the same.

My next solo is titled ‘Through you I am ‘ it portrays the God and selflessness of other people and how they sacrifice themselves for the existence of others how they give unconditionally. My work is aiming to heal this spirits and give a voice to the voiceless. This solo will be shown in Cape town Red Room Gallery.” 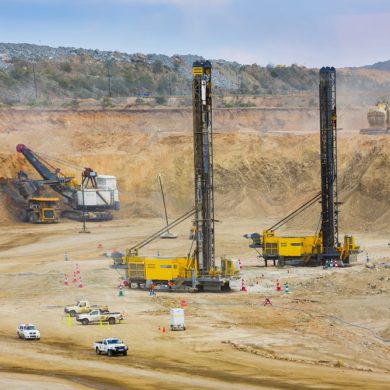