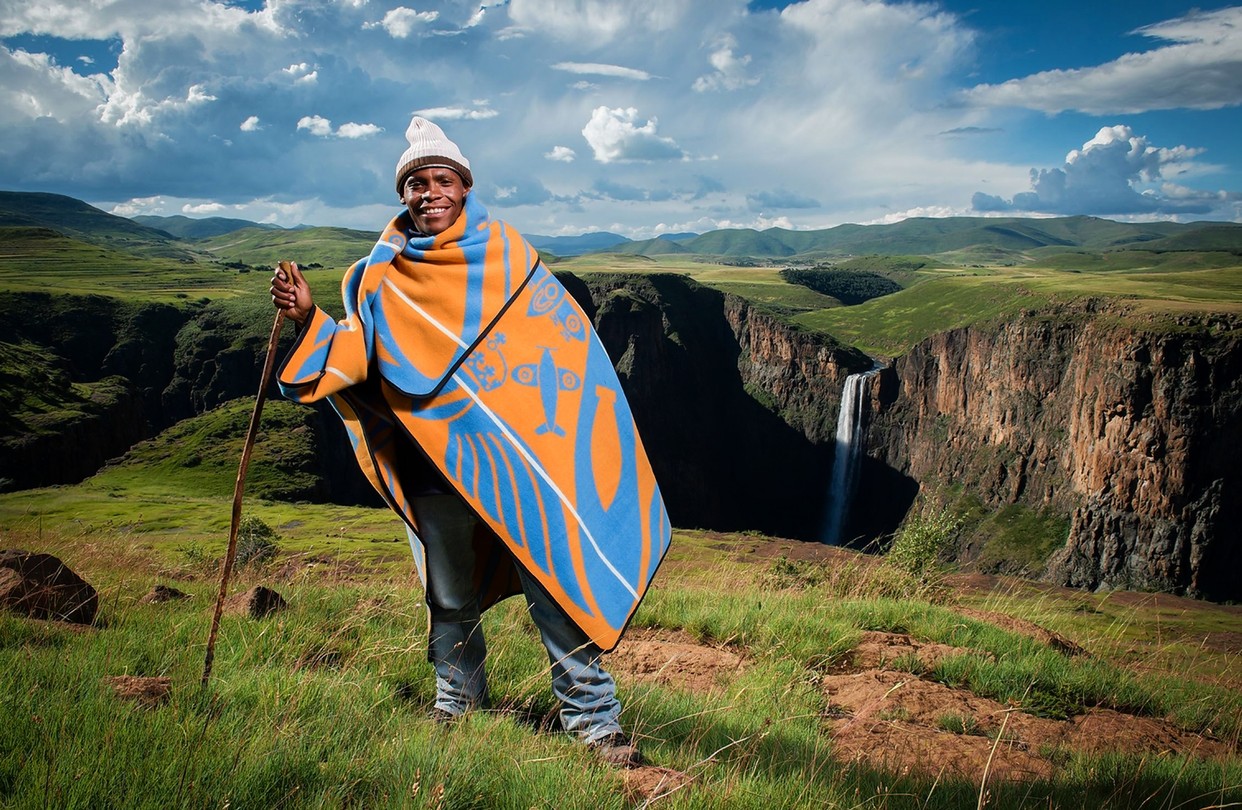 History behind the Basotho Heritage Blankets

The movie Black Panther may have made these beautiful “African blankets” world famous, but the beauty in the Basotho blanket is found in its history and in its cultural significance among the Basotho people of Lesotho and South Africa.

Lesotho is a tiny, land-locked country completely within the borders of South Africa. It is a former British protectorate, but gained independence over 50 years ago. Unlike most countries in Africa, the Kingdom of Lesotho has a nearly homogenous ethnic makeup, a fact to which the country’s lack of civil strife is attributed. It is also the reason that the traditions of the country have survived so long without significant change, and why even today, Basotho blankets and mokorotlos are a point of national pride.

The Basotho blankets date back to pre-civilization in Lesotho. They were traditionally made from only animal skins and are a part of Sotho life from birth to death. A newborn receives their first blanket before they are even born, for many events throughout their lives, and eventually will be buried in one.

The transition from animal skins as a traditional kaross to the textile blankets we see today is attributed to King Moshoeshoe I. The king was gifted a textile blanket by a British man known only as “Mr Howell” that he began wearing on his shoulders in the late 19th century and the country quickly followed suit.

A Basotho Background according to Aranda Textiles

The story of the Basotho Heritage Blanket can be traced to European traders and missionaries who came to Southern Africa as far back as the 1800’s. It began with the father of The Lesotho Kingdom, King Moshoeshoe I. In 1860, King Moshoeshoe I was presented a woollen blanket as a gift. He was so taken with it, that he abandoned the traditional leopard skin kaross in favour of the blanket. The Basotho people soon followed their leader and to this day, the blanket is an integral part of their daily lives. It is also an essential feature of all important life events, from childbirth and marriage to initiation and the coronation of Kings. In 1865, when Queen Victoria gave her protection to Moshoeshoe’s kingdom at his request, he spoke of her as “spreading her blanket” over his country.

In 1897 Queen Victoria visited the then Basutoland during her Jubilee year. She gave King Lerotholi Letsie a blanket as a gift. The blanket was named the Victoria England. The Basotho people had a great love and respect for Queen Victoria and the Victoria England blanket has become a sought after status symbol. The Victoria England is the oldest of the Basotho blanket brands and includes many famous designs; for example the Badges of the Brave which was designed by Mr R.D. Shrubsole. He was inspired by the Basotho regiments who fought alongside the allies during World War II. The design features the various badges belonging to these regiments. However, through the years the Basotho have come to refer to this design as NZ, meaning Nazareth. This is more inclined towards their religious and Christian beliefs.

What makes the Basotho blankets unique is the layout of the design, the various symbols used, the bold colour combinations and the characteristic pin-stripe. This stripe was originally a weaving fault which has become a unique part of the design and dictates how the blanket is worn. When worn in the traditional manner, the pin-stripe runs vertically symbolising growth. Traditionally Basotho blankets are manufactured from wool which offers protection from the wind and rain and provides warmth in the high altitude of The Mountain Kingdom.

An average household will have up to a dozen blankets. These have been acquired over the years, starting with a blanket given before birth. They are used as a gift for big events, but they play the biggest roles in birth, marriage and death.

Babies are received in a new blanket, gifted to the parents for the event. A new blanket ushers males into puberty and through their circumcision.

Sotho people have long believed in life after death, and so traditionally are buried with a blanket to keep them warm for the next life. They also are not buried laying down, but instead in a squatting position, covered with their blanket and with seeds and other important items needed for the next life in their hands. Though Basotho has widely adopted Christianity, this tradition remains.

Marriage in Lesotho is steeped in tradition, and surrounded by family. When a boy wants to marry a girl, he starts by talking to his parents. First, they will interview him to be sure that he is mature enough for marriage and is prepared to be a husband. Once they are happy with his maturity and his choice of bride, they will write a letter of request to her family. It will be delivered to her family by one or two male members of the boy’s family, dressed in their blankets.

Upon receiving the request, the future brides parents will go through the same process of interviewing her, ensuring she is prepared to be a wife and soon a mother. If they approve of her preparedness and of the boy, they decide as a family to accept his letter of request.

Once this request is accepted, the bride’s parents buy her a blanket. This blanket will be used at her wedding. The day the couple is to be married, they will arrive at the boy’s village before dawn. The girl will be surrounded by older, wise women from the village whose role it is to prepare her to be married.

Across the kingdom, a variety of these blankets are worn by the people of Lesotho to represent the different rites of passage in society.

The Moholobela is a fertility blanket worn by young Sotho men in preparation of their transition to manhood. After the initiation ceremony, the young men in Lesotho will don a different blanket known as the Lekhokolo, which confirms that they have reached adulthood.

In preparation for the wedding ceremony, Lesotho women ordinarily wear a Motlotlehi blanket on their wedding day, they will traditionally gift their wife a Serope blanket when their first child is born.

Seana Marena: Means chief’s blanket or to swear by the king: This particular blanket is exclusively worn by the king and his chiefs, it has the highest status of all Basotho blankets.

Lehlosi: A Chiefly blanket made of patterns from the skin of wild cat or leopards. At present, one will often observe chiefs wearing commercially manufactured blankets bearing the print of a leopard, rather than actual leopard skins.

Motlatsi: designed and produced to pay tribute to the birth of Prince Lerotholi. Motlatsi means “successor”. 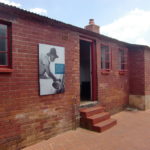 Letlama: worn by traditionally initiated men & women ” tlama” is to tie “ke e tlametse mathata aseng basadi ba batho” (“I have tied (the blanket) for my own problems not for other men’s wives’) is what one who wears this particular blanket would say.

Kharetsa: named after the aloe which is indigenous to the Maloti Mountains of Lesotho.

Sefate and Morena: are used by the Basotho people as an everyday wearing blanket.

Ketelo ea Morena Papa which means the visit of the Pope: Pope John Paul II once had a visit to Lesotho in 1988, a blanket gift was given to him which has been placed in the Vatican in Rome.

While the Basotho blanket is equated with the Kingdom of Lesotho, the style has made its way out of the country, to both controversy and praise.

Louis Vitton visited Lesotho and was inspired by the blankets. The designer used this inspiration in his 2017 menswear collection and it was met with cries of appropriation.

When Black Panther took the world by storm in 2018, people were quick to note the costume design and applaud its roots in Africa. There has been criticism of appropriation by Marvel, along with defenseof the films use of African styles. 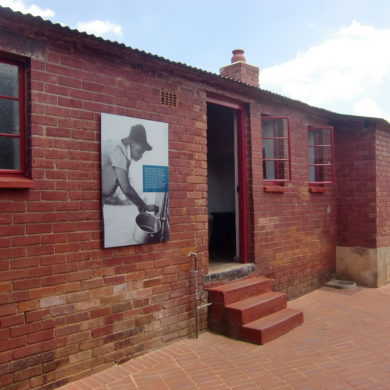