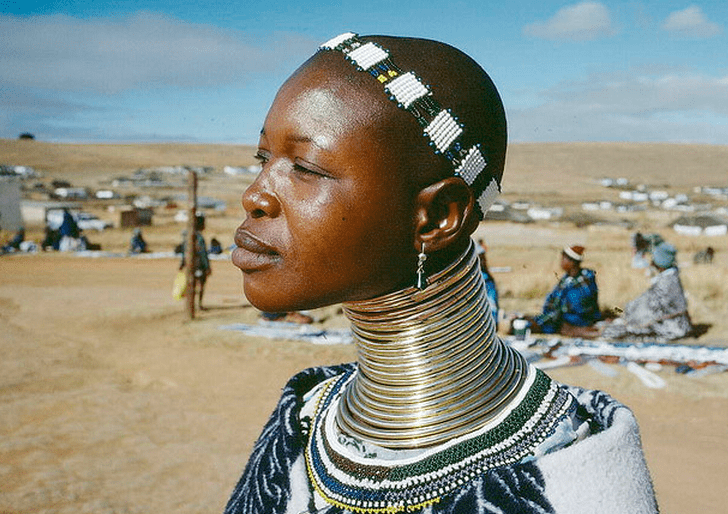 Although the origins of the South African Ndebele are shrouded in mystery, they have been identified as one of the Nguni tribes. The Nguni tribes represent nearly two thirds of South Africa’s Black population and can be divided into four distinct groups; the Central Nguni (the Zulu-speaking peoples), the Southern Nguni (the Xhosa-speaking peoples), the Swazi people from Swaziland and adjacent areas and the Ndebele people of the Northern Province and Mpumalanga.

Once a single nation calling themselves the amaNdebele under the leadership of their last monarch King Musi, they moved away from the Nguni speaking population who had settled themselves in the KwaZulu coastal regions.

This happened within the first half of the 1600s, well before the Mfecane (Zulu) or Difaqane (Sotho).

It was a time of wide-ranging pandemonium and warfare amongst the tribes in South Africa, especially during the period between 1815 and 1840. The amaNdebele settled themselves in a wide region around the towns known today as Polokwane (previously Pietersburg) and Mokopane (previously Potgietersrus).

Trained in the new Zulu warfare tactics and being a formidable warrior, he took control of the Southern Ndebele. He used his knowhow to great effect in campaigns across the Highveld region, overpowering the Sotho and Tswana clans that were living there. Their numbers grew rapidly by the absorption of these clans and by 1835 they embarked on assaults as far away as Swaziland and the Limpopo province.

Although the majority of the Ndebele moved into Zimbabwe following Mzilikazi, a number of them did stay behind in South Africa in the area that became known as the Kwandebele homeland during the apartheid years. You will find their descendants still living there today.

Internal political and social structures
Ndebele authority structures were similar to those of their Zulu cousins. The authority over a tribe was vested in the tribal head (ikozi), assisted by an inner or family council(amaphakathi). Wards (izilindi) were administered by ward heads and the family groups within the wards were governed by the heads of the families. The residential unit of each family was called an umuzi The umuzi usually consisted of a family head (umnumzana) with his wife and unmarried children. If he had more than one wife, the umuzi was divided into two halves, a right and a left half, to accommodate the different wives.An umuzi sometimes grew into a more complex dwelling unit when the head’s married sons and younger brothers joined the household. Every tribe consisted of a number of patrilineal clans or izibongo. This meant that every clan consisted of a group of individuals who shared the same ancestor in the paternal line

Ndebele women traditionally adorned themselves with a variety of ornaments, each symbolising her status in society. After marriage, dresses became increasingly elaborate and spectacular. In earlier times, the Ndebele wife would wear copper and brass rings around her arms, legs and neck, symbolising her bond and faithfulness to her husband, once her home was built. She would only remove the rings after his death. The rings (called idzila) were believed to have strong ritual powers. Husbands used to provide their wives with rings; the richer the husband, the more rings the wife would wear. Today, it is no longer common practice to wear these rings permanently. In addition to the rings, married women also wore neck hoops made of grass (called isigolwani) twisted into a coil and covered in beads, particularly for ceremonial occasions. Isigolwani are sometimes worn as neckpieces and as leg and arm bands by newly wed women whose husbands have not yet provided them with a home, or by girls of marriageable age after the completion of their initiation ceremony.

Married women also wore a five-fingered apron (called an ijogolo) to mark the culmination of the marriage, which only takes place after the birth of the first child. The marriage blanket (nguba) worn by married women was decorated with beadwork to record significant events throughout the woman’s lifetime. For example, long beaded strips signified that the woman’s son was undergoing the initiation ceremony and indicated that the woman had now attained a higher status in Ndebele society. It symbolised joy because her son had achieved manhood as well as the sorrow at losing him to the adult world. A married woman always wore some form of head covering as a sign of respect for her husband. These ranged from a simple beaded headband or a knitted cap to elaborate beaded headdresses (amacubi). Boys usually ran around naked or wore a small front apron of goatskin. However, girls wore beaded aprons or beaded wraparound skirts from an early age. For rituals and ceremonies, Ndebele men adorned themselves with ornaments made for them by their wives.

Ndebele art has always been an important identifying characteristic of the Ndebele. Apart from its aesthetic appeal it has a cultural significance that serves to reinforce the distinctive Ndebele identity. The Ndebele’s essential artistic skill has always been understood to be the ability to combine exterior sources of stimulation with traditional design concepts borrowed from their ancestors. Ndebele artists also demonstrated a fascination with the linear quality of elements in their environment and this is depicted in their artwork. Painting was done freehand, without prior layouts, although the designs were planned beforehand.The characteristic symmetry, proportion and straight edges of Ndebele decorations were done by hand without the help of rulers and squares. Ndebele women were responsible for painting the colourful and intricate patterns on the walls of their houses. This presented the traditionally subordinate wife with an opportunity to express her individuality and sense of self-worth. Her innovativeness in the choice of colours and designs set her apart from her peer group. In some instances, the women also created sculptures to express themselves.

The back and side walls of the house were often painted in earth colours and decorated with simple geometric shapes that were shaped with the fingers and outlined in black. The most innovative and complex designs were painted, in the brightest colours, on the front walls of the house. The front wall that enclosed the courtyard in front of the house formed the gateway (izimpunjwana) and was given special care. Windows provided a focal point for mural designs and their designs were not always symmetrical. Sometimes, makebelieve windows are painted on the walls to create a focal point and also as a mechanism to relieve the geometric rigidity of the wall design. Simple borders painted in a dark colour,lined with white, accentuated less important windows in the inner courtyard and in outside walls.Contemporary Ndebele artists make use of a wider variety of colours (blues, reds, greens and yellows) than traditional artists were able to, mainly because of their commercial availability. Traditionally, muted earth colours, made from ground ochre, and different natural-coloured clays, in white, browns, pinks and yellows, were used. Black was derived from charcoal. Today, bright colours are the order of the day. As Ndebele society became more westernised, the artists started reflecting this change of their society in their paintings. Another change is the addition of stylised representational forms to the typical tradtional abstract geometric designs.

Many Ndebele artists have now also extended their artwork to the interior of houses. Ndebele artists also produce other crafts such as sleeping mats and isingolwani.Isingolwani (colourful neck hoops) are made by winding grass into a hoop, binding it tightly with cotton and decorating it with beads. In order to preserve the grass and to enable the hoop to retain its shape and hardness, the hoop is boiled in sugar water and left in the hot sun for a few days. A further outstanding characteristic of the Ndebele is their beadwork. Beadwork is intricate and time consuming and requires a deft hand and good eyesight. This pastime has long been a social practice in which the women engaged after their chores were finished but today, many projects involve the production of these items for sale to the public.

Marriages were only concluded between members of different clans, that is between individuals who did not have the same clan name. However, a man could marry a woman from the same family as his paternal grandmother. The prospective bride was kept secluded for two weeks before the wedding in a specially made structure in her parents’ house, to shield her from men’s eyes.When the bride emerged from her seclusion, she was wrapped in a blanket and covered by an umbrella that was held for her by a younger girl who also attended to her other needs. On her marriage, the bride was given a marriage blanket, which she would, in time, adorn with beadwork, either added to the blanket’s outer surface or woven into the fabric. After the wedding, the couple lived in the area belonging to the husband’s clan. Women retained the clan name of their fathers but children born of the marriage took their father’s clan name.

In traditional Ndebele society it was believed that illnesses were caused by an external force such as a spell or curse that was put on an individual. The power of a traditional healer was measured by his or her ability to defeat this force. Cures were either effected by medicines or by throwing bones. All traditional medicine men and women (izangoma) were mediums, able to contact ancestral spirits. Some present-day Ndebele still adhere to ancestral worship but many have subsequently become Christians and belong to the mainstream Christian churches or to one of the many local Africanised churches. 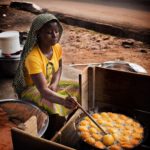 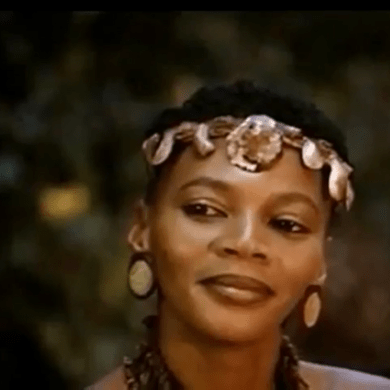 Queen Nandi: Ndlovukazi kaBhebe, of the eLangeni, Queen Mother of the Zulus